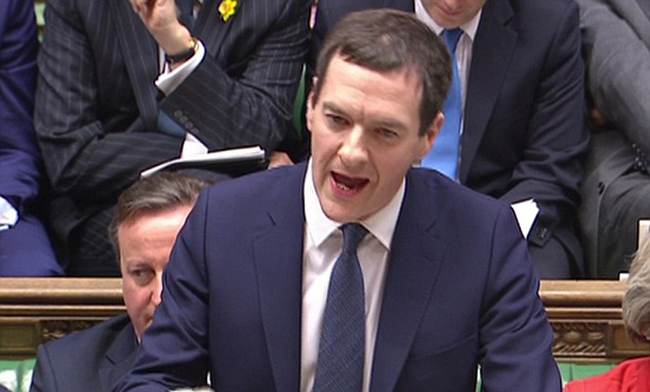 The introduction of Lifetime ISAs to encourage the young to save for both a pension and a home, a boost to income tax allowances, and freezes to duty on fuel, beer, cider and whisky will all be cheered.

Cuts to corporation tax and business rates will help smaller companies, while the hard-pressed oil industry sees the Petroleum Revenue Tax ‘effectively abolished’, but soft drinks firms will be stung with a sugar tax and the Insurance Premium Tax saw a hike once again.

Mr Osborne rose to deliver his Budget statement to the House of Commons at 12.33pm. He concluded his statement at 1.36pm

The Chancellor said Britain is well-placed to cope with global ‘headwinds’ as long as we ‘act now so we don’t pay later’.

The Chancellor used his Budget speech to argue that Britain will be ‘safer, stronger and more secure’ if voters choose to remain in the European Union in the June 23 referendum.

Mr Osborne said the Office for Budget Responsibility had warned that ‘there appears to be a greater consensus that a vote to leave would result in a period of potentially disruptive uncertainty’.
The Chancellor said he will be introducing additional spending cuts totalling £3.5billion by 2020 – lower than the £4billion predicted when he said they would amount to around 50p in every £100 the Government spends.

SAVINGS & PENSIONS
The ISA limit will be increased to £20,000 a year for all savers, and lifetime ISAs will be introduced for young people.

PERSONAL TAXATION
The tax-free personal allowance is being raised to £11,500 with the Chancellor declaring 31 million people will be paying less tax and 1.3 million of the lowest paid taken out of tax altogether
The 40p rate threshold will rise to £45,000 from April next year as Mr Osborne said he had delivered a ‘Budget for working people’.

Mr Osborne also announced the higher rate threshold will rise from £42,385 to £45,000 from April next year, taking more than half a million people ‘who should never have been paying the higher rate out of that higher tax band altogether’.

Mr Osborne announced the abolition of Class 2 National Insurance contributions, which he said would deliver a tax cut of more than £130 for each of Britain’s three million self-employed workers from 2018.

INSURANCE PREMIUM TAX
The Chancellor confirmed a 0.5 per cent increase in Insurance Premium Tax, saying the money raised would be used to fund a ‘£700 million boost to our resilience and flood defences’.

EXCISE DUTIES
Fuel duty frozen for the 6th year in a row despite falling pump prices
Duty on beer, cider, whisky and other spirits will also be frozen this year but all other alcohol duties will rise by inflation as planned

Tobacco duty will rise by 2 per cent above inflation from 6pm tonight, with hand-rolling tobacco up by an additional 3 per cent.

The new rates will come into effect in three weeks’ time The old rates will be kept in place for gains on residential property and carried interest.

A new 10 per cent rate will be applied to long-term investments in unlisted companies.

He said he will radically simplify the administration of business rates, and from 2020, switch the uprating from the higher RPI to the lower CPI.

UK micro-entrepreneurs who sell services online or rent out their homes through the internet will benefit from two new tax-free allowances each worth £1,000 a year.

The Chancellor announced a series of actions to tackle tax avoidance and evasion totalling £12billion, including moves to end the use of ‘personal service companies’ by public sector employees to minimise their tax liabilities

Mr Osborne announced that the richest 1 per cent now contribute 28 per cent of all income tax revenue
In Wales, from 2018 the Severn Bridge tolls will be halved

Mr Osborne gave the go-ahead for a new High Speed 3 (HS3) rail link between Manchester and Leeds and the creation of a new four-lane M62 motorway, part of which runs between the two cities

OIL INDUSTRY
Major tax cuts were announced for the oil and gas industry, which has been hit by falling global prices.
The supplementary charge was slashed from 20 per cent to 10 per cent and Mr Osborne said he was ‘effectively abolishing Petroleum Revenue Tax’.

The Chancellor also announced the abolition of the Carbon Reduction Commitment, and said he would make good the lost revenue by increasing the Climate Change Levy from 2019.

He announced £730million in further auctions to back renewable technologies.

ECONOMIC FORECASTS
Mr Osborne said the UK economy was growing faster than in any other major advanced country in the world and was ‘on course for a budget surplus’.

He warned of a ‘dangerous cocktail of risks’ from global economic instability but said Britain was well-prepared to handle it ‘if we act now so we don’t have to pay later’.

The Office for Budget Responsibility has downgraded its forecast of UK economic growth in 2015 from 2.4 per cent to 2.2 per cent.

After record employment figures released this morning, the OBR is forecasting one million more jobs over the course of this Parliament.

The OBR forecasts lower inflation, at 0.7 per cent this year and 1.6 per cent next year.

Mr Osborne confirmed that he has failed to meet the rule of debt falling as a proportion of GDP this year, but said the government was still on course to record an overall surplus by 2019-20 – one of the targets he has set himself

These reforms will raise £500 million a year but, while 9 per cent will pay more, more than 90 per cent are expected to see their tax bills cut or stay the same.