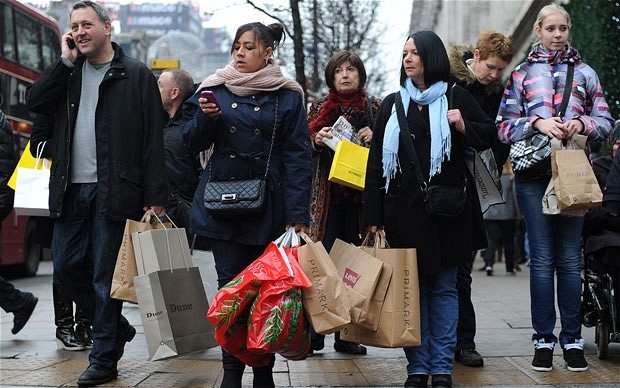 Retail sales fell for the first time in 25 years last year, according to the leading UK retail industry body.

Sale in November and December were particularly weak, falling 0.9%, the BRC said.

A separate report from Barclaycard found a rise in consumer confidence had failed to boost festive spending.

The payments firm, which processes nearly half of all UK debit and credit transactions, said that consumer spending growth had declined if inflation was taken into account.

Helen Dickinson, the chief executive of the BRC, said: “Twice the UK faced the prospect of a no-deal Brexit, as well as political instability that concluded in a December general election – further weakening demand for the festive period.

“Retailers also faced challenges as consumers became both more cautious and more conscientious as they went about their Christmas shopping,” she added.

What is the difference between total and like-for-like sales?

Total sales figures look at all sales, while like-for-like data compares sales from shops that were open the previous year.

Like-for-like sales figures strip out the effects of expansion in a business. Total UK sales declined in 2019 compared with 2018, the BRC said.

This is the first time this has happened since its records began in 1995. However, the volume of the sales in 2019 was still higher than in 2017.

Like-for-like retail sales, which compare sales from shops that were open the previous year, climbed in December, but that was due to a relatively late Black Friday, the BRC said.

Taken together, like-for-like retail sales fell 1.2% over November and December compared with the previous year, it said.

Payments company Barclaycard said in a separate report that a rise in consumer confidence in the festive period had failed to translate into a boost in festive spending on the High Street.

Supermarket sales contracted by 0.9% in December, and sales at specialist retailers such as toys and gaming stores fell 4%.

However, cinema sales rose by 19%, helped by blockbuster releases including Star Wars: The Rise of Skywalker and Frozen II. Spending in pubs and takeaways also rose over the festive period.