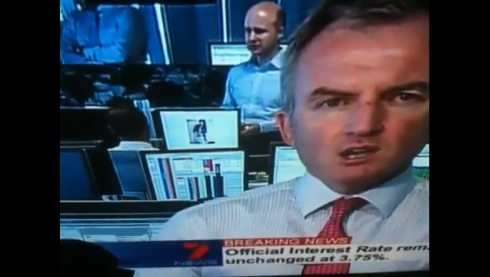 Macquarie Group client investment manager David Kiely provided a financial community primer for what not do to in public view when he clicked on an e-mail containing racy GQ photos of Kerr as his colleague Martin Lakos appeared Tuesday on the country’s Seven Network TV, to discuss the central bank’s surprise decision to keep interest rates unchanged.

Apparently oblivious to the live TV interview, Kiely managed a statistical analysis of another sort, assessing three pictures of Kerr in between glances at charts of financial data.

Kiely then glanced over his shoulder before Lakos – the economist doing the talking – crossed through the trading floor to the studio at the end of his 90-second interview. The clip became a viral video hit, earning a five-star rating on YouTube and a place as the top-viewed News and Politics video.

Both Macquarie and the Seven network issued statements in response to viewer complaints.

“On behalf of our viewers, we have expressed our concern to Macquarie,” a Seven spokesman said.”They have assured us they are taking the appropriate action.”

Sydney-based Macquarie announced that the bank “takes matters such as the unacceptable use of technology extremely seriously” and that the matter “is being dealt with internally.”

The bank proceeded to e-mail its 11,500 staff worldwide with a copy of its Internet policy, telling them to “familiarise themselves,” reported The Australian newspaper. Kiely –  who’s worked at the bank nicknamed the “Millionaire Factory” for three years – has been at home since the incident, awaiting a decision on his fate. It’s expected later this week.

Internet users lined up in support of Kiely, with a Daily Telegraph readers poll showing 85 percent thought he should be allowed to keep his job. Commenters around the world mostly also defended Kiely, pointing out that the Kerr pictures were from GQ, hardly shelf pornography.

Writing under the Internet handle Les, a user on the Perth Now newspaper website: “If he had the magazine there would he have gotten in trouble? Just another attempt to censor the internet and try and make it look like the devil.”