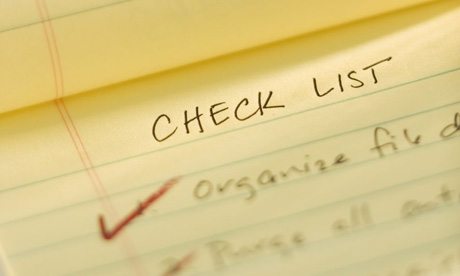 Working for yourself can seem like working for a lot more people than if you had one employer and one boss. In my self-employed life, there are seven online and print publications that are regular clients; their editors all expect their work to be a top priority when they give me an assignment.

The only way I can keep all this straight is with heavy use of to-do lists. Especially one master list, which started today with 35 items on it. That list is laughingly called “Today’s Tasks,” even though I obviously can’t get to all the tasks on it in one day or even many, and some of the tasks are ongoing things, such as a schedule of Glaring Omissions’s reading dates, that never get checked off but that I don’t want to move elsewhere lest I forget about them. My to-do list is the one thing I’m certain to check every day. So I read with interest but skepticism when business gurus recommend a to-do list of very limited length. I see the logic–but it would never work for me.

That’s the challenge I posed to mental-training expert Jason Selk, author of Executive Toughness, when I interviewed him for a column earlier this month. He’s a short-to-do-list proponent, but when I insisted that I need a longer one, he thought for a moment, then offered the following advice:

1. Make the first item on the list a Stephen Covey quote.

“Write this down,” he told me: “‘The noise of urgency creates the illusion of importance.’ Put the word illusion in italics.”

The idea is to have a constant reminder not to let the things with the soonest deadlines dominate my workday, but to pause and consider which tasks will best advance me toward my most important goals. I have to accept that setting priorities for goals and tasks will sometimes mean dropping the ball on other things I intended to do or may even have told someone else I would do. That idea bothers me a lot, but Selk is right–I have to pay attention to what’s important as opposed to urgent.

2. Make the second item a list of the three most important things for the day.

This is a good suggestion, but following it has been tricky for me. I have to admit that I sometimes include items on the three-most-important list not because they truly are most important but because they need to be done soon and are short, simple tasks that I can quickly clear away and replace with more important ones.

But I do have important items on my to-do list that have languished there for months on end–things like getting a health checkup, for instance, or pitching a story to a magazine–and they never get done because they don’t have deadlines and no one is pushing me for them. Having the Covey quote to stare at and the list of the three most important things have at least gotten me thinking that I have to make time for such items even if other things are pressing. And sometimes it has inspired me to do the items with long-term importance rather than short-term urgency.

More recently, I read about Matthew May, author of The Laws of Subtraction, who suggests simply eliminating the bottom 20% of one’s to-do list, on the reasonable assumption that those items won’t make much of a difference. I can’t go that far, but I’ve been cutting out the less important items that–if I’m honest with myself–I’ll never get to anyway. So far today, I’ve managed to cut 35 tasks down to 32 this way.

And that’s OK, Selk would say. “People have a perfectionist mentality,” he says. “You have 25 items on your to-do list. Instead of going from 25 to 3, I’d go from 25 to 22, with the end goal of getting it down to 3.” Judging yourself against perfection will lead to discouragement. “You have to recognize what you’re doing well,” he says.

Sounds good to me.