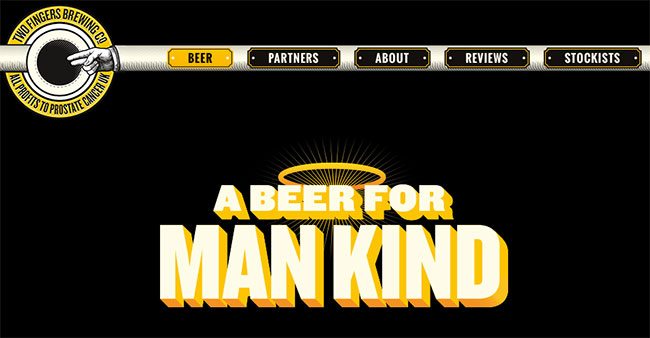 UK firm, Two Fingers Brewing Co, the only beer brand that gives back to the guys that drink it by donating all their profits to Prostate Cancer UK, are in the final of The Venture.

Currently head to head in a public vote to compete for an initial share of $250,000 (from the $1 million fund), people from across the world can view the finalists’ profiles and vote for their favourite at www.TheVenture.com until June 14th.

One of just 16 startups chosen from over 1,000 entries across 5 continents, the group of advertising executives will then compete for the remaining prize fund at the global final hosted by British actor, comedian and TV host James Corden in San Francisco 23rd-25th July.

Each finalist has a truly unique story to tell about the inspiration for their startup. Will Waldron, co-founder at Two Fingers expands: “After several of our advertising colleagues were affected by prostate cancer we realised how high the chances were of us, someone we care about – or any man – getting it. So, we decided to do something. Since guys love beer so much, we figured it was about time there was a beer brand that gave back, by giving all its profits to fighting prostate cancer.”

David Gluckman, the founder of Lumkani, witnessed the devastating impact of shack fires in informal settlements in South Africa and decided to create an affordable fire detection device to mitigate the loss of life and property.

Victoria Alonsoperez saw the impact the outbreak of foot and mouth disease had on the Uruguayan economy – creating poverty and unemployment. So she made it her mission to develop a platform (Chipsafer) that would transform the way farmers monitor and care for their livestock in the future.

Chivas entered into this space in the first place because research they commissioned showed that today’s emerging Gen Y entrepreneurs bake a social purpose into their business plan as opposed to ‘the old guard’ who see it as something they ought to be seen to be doing.

The 16 aspiring startups have been chosen to represent their local countries in The Venture global final for not only their potential to be profitable as a business, but also their ability to offer scalable and sustainable impact solutions.

Sonal Shah, former Director of the Office of Social Innovation and Civic Participation in the White House under US President Barack Obama, is the latest judge to be announced alongside Adrian Grenier (actor, producer and social entrepreneur), Morgan Clendaniel (Editor of Fast Company’s Co.Exist) and Alex Ricard (Pernod Ricard Chairman and CEO).

Adrian Grenier commented: “As someone who is hugely invested in social enterprises myself, it’s really eye opening to see what other entrepreneurs around the globe are up to and the issues they’re attempting to tackle. We have uncovered 16 amazing finalists whose vision, passion and commitment to the greater good should be an inspiration to us all. I encourage everyone to find out more about them and their stories and get voting…they need your votes!”

Richard Black, Chivas Regal Global Brand Director, added: “Due to this being a global competition across five continents we’ve discovered an incredible collection of social entrepreneurs that are aiming to tackle a broad array of issues. As a brand we’re very proud to be putting a spotlight on these talented and driven business people and we can’t wait to see how the public respond with their votes.”

In the week leading up to The Venture Final Pitch, the finalists will attend an Accelerator Week in Silicon Valley where they will receive mentorship from influential figures in social enterprise and companies such as venture capital firm Andreessen Horowitz, Google, Duarte and IDEO.