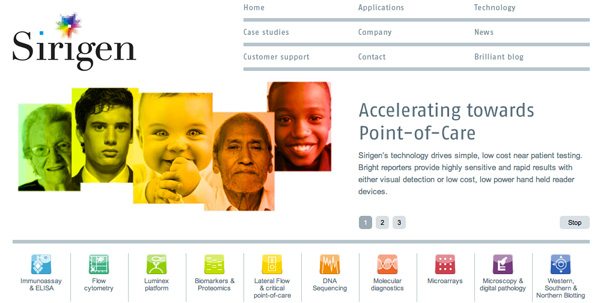 Founded in 2004, Sirigen uses Nobel-prize winning science to produce light harvesting polymers which have a wide range of applications in research, medical diagnostics and life sciences.

BD which has a market capitalisation of $15 billion is focused on improving drug delivery, enhancing the quality and speed of diagnosing infectious diseases and cancers, and advancing research, discovery and production of new drugs and vaccines.

Sirigen is headquartered at Ringwood, Hampshire, UK with offices in San Diego, California and employs 15 staff across these locations. Sirigen has raised circa £10.3 million across four rounds of funding since January 2008 from London Business Angel investors (LBA) and five UK venture capital investors led by Seraphim Capital, the UK’s only Angel led Enterprise Capital Fund.

All investors are fully realising their holdings and achieving potential returns in the range of 2.5x – 4.0x on their original investment.

Sirigen’s light harvesting technology can dramatically boost the sensitivity of fluorescent reagents, making them four to ten times brighter than conventional dyes – a breakthrough in the field.

Nick Kerton, former CEO of Sirigen, commented, “BD and Sirigen have established a strong relationship over the last 6 years and BD’s technical expertise is an excellent match to the highly talented and unique Sirigen Chemistry team. Over the next few years the teams will work to accelerate the development of novel dyes for flow cytometry analysis based on Sirigen’s uniquely tuneable fluorescent chemistry. Our longstanding relationship and complementary teams gives me a great deal of confidence that they will deliver exciting offerings for customers”.

Anthony Clarke, CEO of London Business Angels commented, “Sirigen presented at LBA in May 2009 and whilst the benefits of its patented protected IP were apparent at the time the company was loss making and in need of further new monies to help it to commercialise. LBA angels proceeded to invest circa £500k into this early stage business and for those who obtained EIS relief and held the shares for long enough this is likely to provide significant tax free capital gains from the recent exit. Sirigen Group is a good example of angels and VC’s co investing together in order to help a company achieve a considerable cash exit from a major US company.”