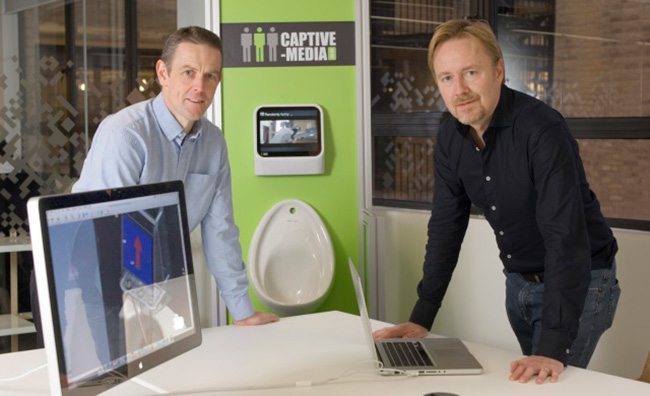 The £200,000 investment from London Business Angels investors, in conjunction with £90,000 from the new £25m London Co-Investment Fund and a £65,000 investment by the LBA EIS Roundtable Syndicate Fund 2014, will be used to expand the business’ network of venues domestically and overseas.

This somewhat unique advertising start-up claims to be able to harness the previously untapped resource of men’s toilet habits to engage them in advertising campaigns.

Patented screens installed above urinals feature games that are controlled by urinating – with advertisers appearing digitally within the content or branding existing games.

Captive Media say altho their products are currently in more than 50 UK venues and are also available in 12 countries, including the USA, Spain, France, Italy and Russia and big name brands such as Lynx, Captain Morgan, Dr Dre’s Beats as well as Campaigns for Drinkaware and Macmillan have already run advertising campaigns.

Captive Media CEO, Gordon MacSween commented: “In 2014 we built a small, ad-based network in London and ran ad campaigns for Diageo, Apple, 20th Century Fox and other big brands. Now, with the backing of LBA, LCIF and other UK angels, we are creating a nationwide network of 200 screens.

London Business Angels CEO, Anthony Clarke said: “The Captive Media team have developed a highly innovative and entertaining advertising platform whose ability to scale has already been proven at over 3o London venues.

“The LBA syndicate of £200,000 plus additional co-investment will allow the company to roll out its products at more venues across the UK and globally. I am also pleased that LBA was able to complete its first co-investment through its partnership with the £25m London Co-investment Fund.”