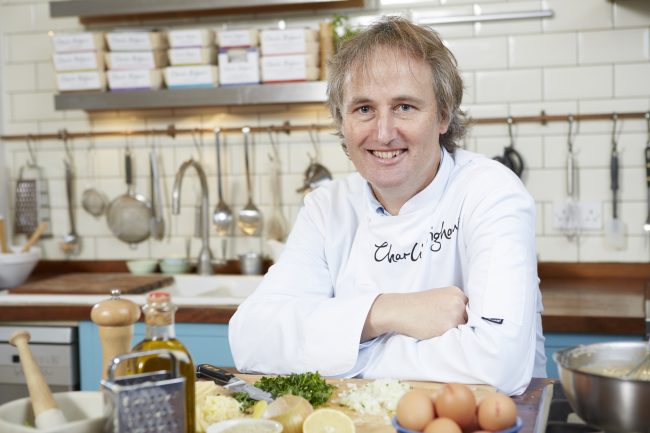 We talk to Charlie Bigham about his inspirations in business, and find out if there’s anything he would have done differently given the chance

“I’m the founder Charlie Bigham’s. I’m lucky enough to have a very good CEO who works with me and runs the day to day business which means I can get involved in lots of things.

“I get very involved in the food, I have a small team of people I work with in the business who maintain the standards of delicious food that I require and then the other thing I’m currently very involved in is the culture of the business. I believe very passionately that good businesses are driven by strong cultures, which are built up over the long term. At the moment we’re in the process of building a new production kitchen and I’m very involved in that project.”

You’re not from a traditionally catering background, how did the business come about?

“The great thing about starting a food business is we are all experts at food as most of us eat at least three times a day, so we all know about food and whilst I’m not a chef I am a cook and I’ve loved cooking since I was pretty young. I probably started cooking when I was 13 or 14, I think a love of food and cooking has stood me in good stead.

“I think I was lucky that I’m someone who’s reasonably suited to starting, running, and growing their own business and I always knew I was going to do that, so I was looking for something to do and food seemed like a good idea and fingers crossed it has been a good idea.”

What’s your inspiration in business?

It’s a funny one because there wasn’t any individual person, but I find that through life you meet lots of incredible people all who have something inspiring about their life or something they’ve done. That might be someone who’s well-known and on the public stage and lots of us might admire sort of a Richard Branson-like figure or someone not in business at all.

I’m also incredibly inspired by people who nobody knows about, just people who have their own individual life stories, we have people from all over the world who work with us who make a fantastic team of people and some of the most inspiring stories I hear, are the guys who have had some really difficult times in the country they were born in and they’ve come to the UK and made a new life for themselves and they’re absolutely extraordinary stories. They are as inspiring, if not, more inspiring than the more well-known people that we may read about in newspapers and hear about in the media.

Who do you admire in business?

I know I admire lots of people in business because actually starting and growing and building a great business is a hard thing to do and so, anyone who’s done it, I look at and admire what they’ve done. I think particularly you can look at people who have done something in your sector and I’m very admiring of companies that have been around for two or three hundred years as well. Waitrose is an important customer of ours and extremely admiring of what they’ve done and the vision their founder, a guy called John Lewis had, the extraordinary visions he had, and sustained the business through its history and contributed to it being the great business it is today.

Anything you would have done differently?

I mean, of course there are a few things I would do differently because apart from anything else, I’m someone who believes that doing the same thing twice is very boring so if I had a chance to do it all again, I would deliberately do it differently because otherwise I would be bored.

I’ve made loads of mistakes along the way and that’s part of the journey that anybody who sets up their own business has to go through and actually, making mistakes is great. In many ways it can be painful but you learn from them and I don’t think you can go through life without making mistakes, that would be extraordinary. If there was one thing, I don’t really believe in regrets and trying to re-write history, but I guess I think quite a lot of people who set up businesses actually could have started 5 years earlier than they did and that’s probably the case with me as well.

Do you have any expansion plans?

Well, I take a simply view on this I think all we’ve got to do is we’ve got to make sure we’re in the business of making food and we’re in the business of making delicious food, so we’ve got to make sure that we put our effort into making our food more and more delicious and then contributing to that, we’ve got to put lots of effort into attracting and retaining and growing the very very best people and I think kind of, for us, if we do those two things, we just have a great team of people who are very focused on making delicious food, then all the other bits in terms of sales and businessy stuff, that’s a product of doing those other bits.

She would describe you meals as a high price but for high quality what would you say to that?

If you look at how much we charge to give you £7 for a meal for two people for a main meal of the day and you stack that up against what people might pay on their way into work if they stop and have a cup of coffee and a bun or what they might have as an alternative in the evening if they order a not particularly nutritious or, dare I say delicious, takeaway pizza. So it’s extraordinary value for money so I think it’s a bizarre thing that people look at us and say that we’re expensive – we’re not, we’re extraordinarily good value for money and consumers recognise that. That’s why, touch wood, even through some tough economic times over the last 5 years, we’ve continued to grow and thrive as a business.

The second point in terms of health and those debates that are going on, I’m a great believer in eating good food and if you eat good food in a balanced way, it’s good for you. I think I’ve been doing this long enough that I’ve seen the great, not scares, but there’s always a great enemy of health out there, a few years ago it was fat and then it was salt and today, it’s sugar. We have virtually no sugar in any of our food because you don’t need to put sugar in your food. I look at our food and because we use high quality, fresh ingredients and we make things in a kitchen, rather than a factory, our food is good for you, it’s good, healthy food as part of a balanced diet because we put good ingredients in.

How do you think Brexit will affect business?

I think the Brexit vote is a very wrong vote and is a very sad vote for the UK and I personally feel very strongly that it’s a terribly poor decision that we’ve collectively made and in terms of impact on business, yes, it comes in waves of bad news really for us.

There’s a short-term impact because we do import some food and other things from Europe and elsewhere in the world and prices will go up because of current infatuation and that’s obviously not good news. I think most economists at the moment are saying the economy is going to be in worst shape as a result of this vote and my experience over the years would say that definitely the economy will be in worst shape which does have an impact on everyone in business because consumer sentiment changes and perhaps the most significant impact is around people.

We have a great team of people here who come from all over the world, a lot of people from different countries in Europe from France, from Spain, from Portugal, from Greece, from Czech Republic, all over the place, who are an amazing team of people, absolute incredible team of people, lots of who have worked with me for many years. I’m very depressed when I’ve talked to some of them and the message that they’ve received as a result of this vote is that they feel less welcome in the UK today than they did. As a result some people are considering their future in the UK and the future of their children who may have been born here and go to school and don’t feel that this is the right place to be.

What advice would you give to somebody just starting out?

Well, the start early one is part of the standard advice I give to people. I just say ‘do it now’ because I think it’s a bit of a scary prejudice to be standing on the edge of always – should I? shouldn’t I? I see quite a lot of people hesitating on the edge of that prejudice.