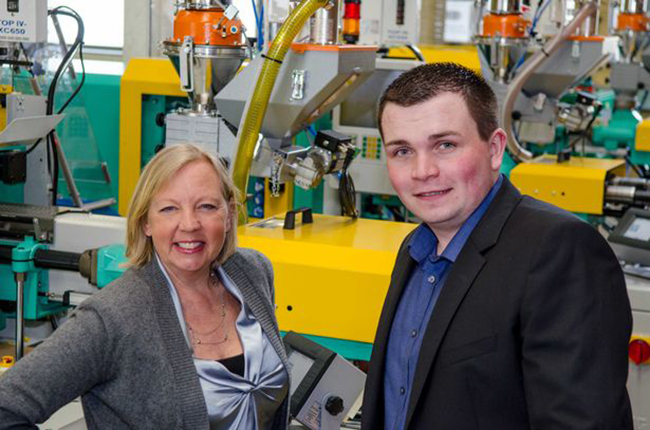 Jordan Daykin isn’t an obvious success story. He struggled at school and quit at 13 after suffering from bullying.

But in the next seven years he invented GripIt, a special fixing that would be sold in hundreds of shops. Then he won funding in BBC2’s Dragons’ Den, and two years on he heads up a £10million business.

Now 20, Daykin is also the subject of a BBC 2 documentary about Dragon’s Den entrepreneurs, Pitches to Riches, due to air on Sunday, where we see how he turned a clever idea into his own company employing 20 people – without a single academic qualification.

Not everyone is academic. In my case, the teachers used to go mad because I used to work but when I went to an exam I got nervous and just failed. I left school when I was 13 and learnt from tutors instead.

At that time, my dad was working overseas, so I moved in with my nan and grandad’s house. They didn’t have a spare room, so they converted the garage into one for me.

I was quite a fussy teenager and I wanted a curtain. My granddad and I were trying to fix the curtain rail and we couldn’t find anything that would work. We went into his garden shed and cut up bits of spare plastic and anything we had. It worked.

A couple of weeks later I wanted to hang a TV. I searched online, but there was nothing out there. I have always had a knack for finding a gap in the market. I went to my grandad and he said: “Let’s do it.”

Doing all the patents and marketing took me four years. We launched in 2012. I managed to get it into roughly 500 stores in the first year. Then it was a case of applying to Dragons’ Den.

That was nerve wracking. You get three minutes for your pitch and they get two hours of questioning. I was there for an hour and a half.

We got £80,00 from Deborah Meaden. Up until then, I had done everything from my grandparents’ house, but now we have take our own industrial unit. We bought some machines to automate the product and went from there.

At first it was just me and now we are 20. At the beginning I had four friends who used to help me. I said: “If it ever gets big, there is a job for you.” They know how the business works.

Our three-year plan is to go to the US and Australia. We will be adding 15,000 more stores and bringing out new products. It’s going to be busy.

My grandfather is 82 now. He is overwhelmed by the business’ success. In the documentary, when they tell him the company is worth £10million, he bursts into tears. I go round every day and tell him what has happened, and his face lights up.

Not being academically successful isn’t the end of the road. If you try hard, you can go somewhere. But nothing was handed to me on a plate – I had to go and take it.