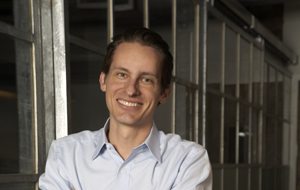 We talk to Pit Karbe the Managing Director of Hello Fresh, which has been announced the HP Smart Business of the Year. Pit tells us about his business, what inspires him and what advice he would give to someone starting out.

I am the founder of Hello Fresh, a grocery delivery service that shakes things up in the kitchen. We send our customers interesting recipes and all the ingredients to cook them. It’s a completely new way to cook and eat. We launched in London in January and quickly expanded the business. We are now shipping nationwide and have been featured in major newspapers and magazines. It’s been quite an experience.

What is your inspiration in business?
What attracts me to entrepreneurship is the opportunity to build something that makes a difference in people’s lives. My first business was a greeting card company with a charitable mission. With Hello Fresh our goal is to change the way people eat. When I look at the food industry today I see giant corporations that don’t have the consumer’s best interested in mind. I wholeheartedly subscribe to Jamie Oliver’s mission and believe that he has done a great deal to improve awareness of healthy eating in the UK. But you don’t change behavior by telling people what to eat. You need to make them want to eat better. That’s why I started Hello Fresh. Our service is so amazing that it turns even the most kitchen-phobic into a master chef. We’re only a few months old but we constantly get calls from customers who tell us how Hello Fresh has changed their lives. That’s what inspires me.

Who do you admire?
I admire entrepreneurs who aren’t afraid to question the status quo and take on giants in pursuit of their vision. Building a business is difficult and it’s certainly not for the faint-of-heart. Many successful entrepreneurs have to overcome years of adversity before they become an “overnight success” in the public eye. I have huge respect for such persistence.

Looking back, are there things you would have done differently?
Almost everything. Our modus operandi is to move fast, learn from it and improve. We don’t strategize and hypothesize for ages before we do something. Things don’t turn out the way you planned anyway. Running a startup means that you operate in an environment of extreme uncertainty. Instead of trying to reduce the uncertainty we embrace it. By trial and error we are able to achieve our goals much faster.

What defines your way of business?
Speed and agility. I started working on Hello Fresh in December 2011. At the beginning of January I had a team and two weeks later we made our first deliveries. We initially only offered Hello Fresh in London but the response was so overwhelming that we started to ship nationwide a few months later.

However, we don’t pursue speed for its own sake. It serves a purpose. When you start a business, the clock is ticking. Funding is limited and so is time. If you view a startup as a series of experiments to prove your model and achieve product-market fit, the faster you move the more experiments you can run and the higher your chances for success are.

What advice would you give to someone just starting out?
Follow your passion and just get going! If you’re thinking about starting a business, it is paramount that you choose something you are truly passionate about. Don’t pick an idea because you think there is a market for it. Entrepreneurship is all-consuming – so choose something you think you can be excited about every day for the next five years. And don’t over-analyze things. Have a good grasp of your market and a viable business model but don’t write a business plan – they’re a waste of time. It’s more important to get going and test your assumptions in the real world.