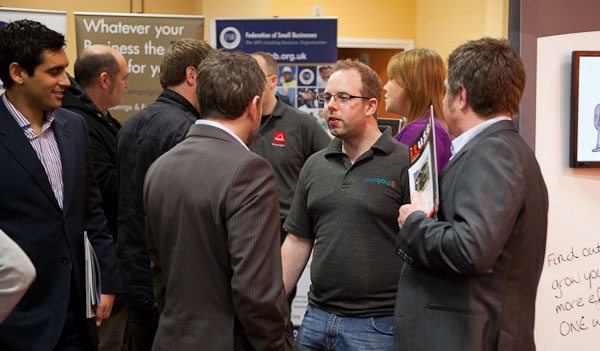 I realised it was time for an article on the stupid mistakes that salespeople (or anyone manning the stand) make that cost them leads, business, and the company valuable sales!

Stupid Mistake No 1 – Judging Prospects By Their Name Badge

I’ve seen so many salespeople do that at exhibitions it’s ridiculous! Far too many people gaze at prospects’ name badges, in order to find out their job titles, to see whether they’re worth talking to or not!

Prospects know you’re doing this – as the salespeople on pretty much every stand they’ve walked past so far have done that to them as well! They tire of this very quickly. You might as well be saying “Excuse me. Do you mind if I stare at your name badge in a really weird kind of way? I’m just looking at your job title to find out whether you’re worth talking to or not. If so, great! I’ll be really nice to you. If not, move along. And don’t think you’re taking one of our chocolates either”.

Experienced exhibition visitors, myself included, will go to exhibitions and either not fill in the correct details on the name badge because we don’t want to be leapt upon by every salesperson, or give a more junior job title – because we know that salespeople won’t bother us if we do! How many of those prospects are you missing out on by using your current approach?

Stupid Mistake No 2 – Drinking Too Much The Night Before

I thought long and hard about including this one. Every time I thought about I wondered “surely salespeople know this isn’t a good idea?” and “surely I don’t have to remind them not to do it?” Unfortunately based on the exhibitions I’ve attended recently, I do!

Even though salespeople know this is a bad idea, somehow they always end up doing it! The idea of “just going for one or two” turns into quite a few, a late night and usually a VERY large hangover the next morning!

Being on an exhibition stand when you’re hungover is not a very pleasant experience. Either for you, your colleagues or your prospects. You look awful, feel awful and smell awful, and no matter what you do, people can tell. Imagine the impression you’re giving if you’re best client turns up unexpectedly, or your best prospect walks up? Not good.

Whenever you have to be on a stand the next day, avoid drinking at all costs! If you don’t, you’re costing yourself leads, sales and your company valuable business. Not to mention probably creating an HR issue as well. Don’t do it!

Stupid Mistake No 3 – Not Being Welcoming Enough

Far too many people aren’t welcoming enough on their stands. Prospects are walking around looking at various companies while their salespeople are busy talking to each other, not looking around for potential prospects that would like to engage in conversation, stood with their backs to prospects etc.

Some prospects aren’t necessarily confident to march right up to you on the stand and ask for details of your latest product or service! They’ll linger a little off the stand, trying to work out what you do and if they want to engage or not. If you and your stand look more hostile than welcoming they’ll move on to one of your competitors instead!

Start being alive and awake to opportunities with prospects who are lingering just off your stand itself. Look for opportunities to engage them and make them feel more comfortable talking to you, rather than driving them away.

Stupid Mistake No 4 – Breaking Down The Stand Too Early

This is one of the stupidest mistakes of all! I think this has happened at EVERY exhibition I’ve ever been too.

Once I was at an exhibition that was due to close at 5.30pm. At 4.30pm, not only were a number of people breaking down their stands and packing up, but some had already done so and their stand was empty – are these people crazy?!

There were still prospects walking around the exhibition at 5.20, never mind 4.30! When I went over to a few stands and said them “you’re packing up early aren’t you?”, guess what their responses were? “Well it’s been a long day”, “We could do with getting home now” and “We want to get a head-start on the traffic”.

Now, whilst I realise that exhibitions can be tiring, how ridiculous are those statements?! How could they know that some of their best prospects weren’t coming to look at those times? What about the impression it had on potential customers if they say a stand being packed up, or worse still completely empty?

What kind of impression might that give someone? In the economic climate maybe even that you’re gone out of business? Or that you can’t afford to pay for the stand? Neither of these are very good impressions to give people, are they?

There is NO EXCUSE for packing a stand up early. Ever.

Here are some more stupid mistakes that you need to make sure you’re not making. They’re all related to each other, so I’ve included them all together here. I’ve seen all of these personally at exhibitions over the past year, so don’t think people don’t do them!

Eating On The Stand – I’m astounded how many times I see this! Why on earth would you want to eat or drink in front of a potential customer? Would you go to see them at their offices, and then pull out a pre-packed sandwich from your case and start to eat it in front of them? So why are you doing the same thing at an exhibition? Bizarre!

Sitting Down – Now, I know exhibitions can be tiring, but sitting down does not show you in a good light. If you really have to do (on the stand), then make sure your stand is designed so you can sit on bar stools, rather than anything at normal ‘chair’ height. If you’re sat down, the unconscious message you’re sending to prospects is that they have to disturb you to speak to you. So they probably won’t bother!

Reading A Book On The Stand – Even more stupid than the last one! I saw a lady on a stand at an educational show last year break out a book and start reading it on the stand! What faster way of showing people you’re not interested in them is there than that?!!

Texting Or Using Your Mobile Phone – You’ve just found the faster way than the reading example above! I’ve lost count of the amount of salespeople that I see sat down (see above) and texting on their stand – meaning they’re looking down at their phone, not at potential prospects!

Even worse is making/taking calls on their mobile – you might as well say to people “I’m more important than you because I’m on my mobile phone. And the person I’m talking to is more important than you, everyone else here, and the amount of the money the company has paid me and the exhibition company to be at this event otherwise I’d wouldn’t be on the phone, would I?”

Pathetic! There is NO EXCUSE for being on your mobile on your exhibition stand! If you were in a client meeting, you’d turn it off wouldn’t you? So why don’t you do that now? And if you really do HAVE to make/take a call, why not get a colleague to cover you, while you step off the stand to make it. Not hard is it?

Follow the steps above and make sure you don’t make these mistakes and lose valuable leads, sales and your company business at exhibitions in future