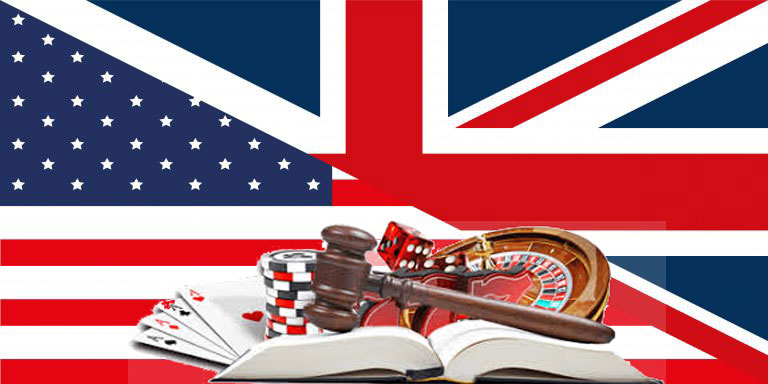 The United Kingdom and the United States have entirely different approaches to online gambling.

The UK has the most developed regulatory framework for online gambling in the world, complete with policies and regulations which protect gamblers from their own worst excesses. The United States prefers to ban online gambling, driving the activity underground into a shadow economy.

At first glance, one might assume that the UK’s bettors have the most serious problem gambling issues in the western world. The UK Gambling Commission issues fines for gaming companies which do not follow regulations. Studies from British universities show relatively high levels of gaming activity among students, while gaming addiction is noted as a problem among the population in general. Groups like GambleAware point out problems in the system, such as the £100 bet maximum for fixed-odds betting terminals (FOBTs).

In the United States gaming market, one doesn’t see the steady stream of rulings and fines against casino groups. Studies come and go but often focus on the impact of land-based casino gaming. The unregulated gambling economy is ignored, so it seems to be minor or nonexistent.

Differences in the Law: UK vs. US Gaming Laws

The UK’s online gambling industry received further regulations from the 2014 Gambling (Licensing & Advertising) Bill. This imposed the Point-of-Consumption Tax (POCT), which targeted British gaming companies which relocated to Gibraltar, Malta, or the Isle of Man to avoid higher taxes. The 15% point-of-consumption tax on remote gambling assured anyone accepting British gamblers paid a tax. Online sports betting taxes were raised from 6.75% to 15% due to the same law.

The British gambling industry contributes over £6 billion to the national economy, which is roughly 0.5% of GDP. It pays about £750 Million in tax revenues each year and employs over 100,000 UK residents.

Remote gambling contributes about 35% of that amount. The UK Gambling Commission reports that British online gambling generates about £4.9 billion in revenues each year.

Around the same time the UK regulated and taxed its online gambling industry, the United States went in the opposite direction when it came to online gambling. Chris Moneymaker’s win of the 2003 World Series of Poker Main Event created a phenomenon in U.S. online gambling: The Poker Boom. Because Moneymaker qualified for the WSOP Main Event through a PokerStars online satellite event, millions of American gamblers became interested in the path Moneymaker took. American online card rooms, casinos, and sportsbooks experienced a vast expansion in revenues and visibility.

Going mainstream can be a double-edged sword, and so it was with the US online gambling industry. By October 2006, the US Congress had noticed online gambling’s impact and took measures to shut it down. Social conservative groups called for a ban, which is exactly what the Congress gave them.

Though the Unlawful Internet Gambling Enforcement Act (UIGEA) was not popular enough to pass on its own merits, it was attached to the Safe Port Act, which kept non-American companies from managing American commercial ports. Few members of Congress dared to vote against a so-called patriotic bill, so the UIGEA went into effect on December 31, 2006.

The UIGEA banned any form of online gambling which had been banned for interstate telephone lines under the 1961 Wire Act. The Wire Act was used by the FBI to indict organized crime members in the 1960s for racketeering. They would prove mob racketeers had taken illegal sports bets over the phone lines, then put them in prison for racketeering and money laundering. The Bush Administration era US Department of Justice viewed all forms of gambling to be banned under the Wire Act, and thus banned all forms of online gambling under the UIGEA.

Top poker sites like PokerStars, Full Tilt Poker, Absolute Poker, and Ultimate Bet continued to accept player from US poker players. This led to the April 15, 2011 domain seizure and indictments against online poker executives from those companies. The US poker community called the day “Black Friday”, for it effectively destroyed the US online poker industry.

Later that year, the notion that PokerStars and other companies violated the UIGEA was challenged by state attorney generals. The AGs for Illinois and New York state asked U.S. Attorney General Eric Holder his opinion on whether the UIGEA banned online casinos and poker sites. The Obama Era DOJ gave an opinion that the UIGEA did not pertain to online casinos and card rooms, because the 1961 Wire Act never was used against interstate telephone betting on poker, blackjack, or slots. No one ever bet on slot machines over the phone lines, so online slots and other games were not banned under the UIGEA.

With that decision, several US states moved to legalize, regulate, and tax online poker and casino betting. New Jersey, Delaware, and Nevada all passed online gambling legalization bills in 2013. Pennsylvania followed suit in 2017. California, New York state, Michigan, Illinois, and Connecticut all discussed the legalization of online gambling but never have passed such laws. Most analysts believe other US states will legalize online poker and casino sites in the coming years, especially in light the May 2018 US Supreme Court repeal of PASPA, which opened the door for legal land-based sportsbooks and intrastate online sports betting.

US Online and Mobile Gambling Laws

New Jersey’s online gambling market generates about $250 million a year. Pennsylvania, which has a population 33% larger than New Jersey’s population, probably will generate $350 million or more. Delaware and Nevada have negligible revenues from online gambling, but California online poker would be the size of most major countries’ gaming revenues.

A big part of the United States still prefers to ban “vices” or “sins”, due to a lingering Puritanical streak in American society. Ironically, the Puritans’ flight from England in the Great Migration of the 1630s and the Great Ejection of 1662 purged England of Puritanical influences. Despite so many similarities, the two countries have major differences in the way they legislate gambling laws.