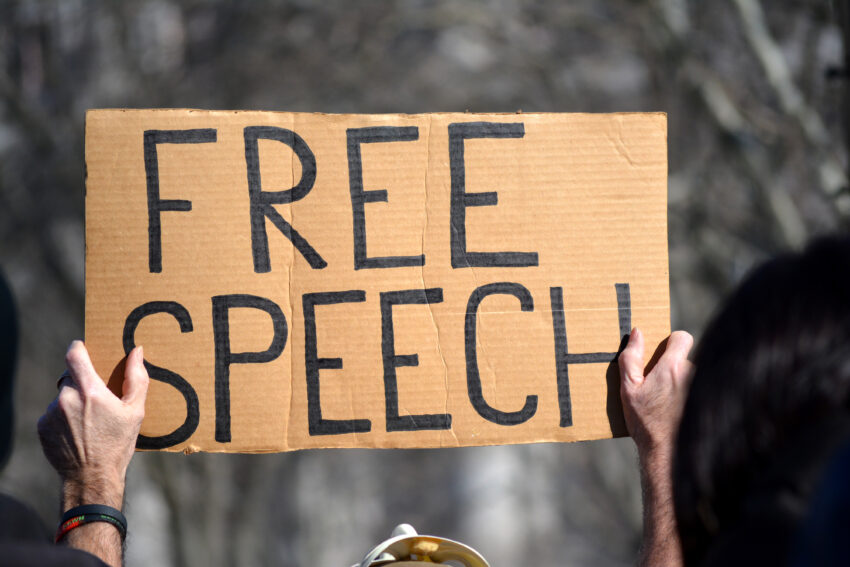 Britain’s ‘take-no-prisoners’ culture war has entered a new round of acrimonious sniping as the government attempts to intervene in the bitterly divisive freedom of speech debate that has engulfed social media platforms and university campuses.

Concerned over tech giants’ record on policing digital content and the ‘no-platforming’ culture that some believe has gripped British universities, the government is seeking to play more of a regulatory role over what content and views are permissible in a modern progressive democracy.

But bills on tackling harmful online content and the promotion of freedom speech have already provoked protests from politicians and activists who believe they are heavy-handed, ill-conceived and likely to censor opinion and, possibly, even encourage hate speech, so exacerbating the ‘cancel culture’ that many believe is limiting public discourse.

From the rejection of speaking requests on university campuses, transgender dogmatism, protests over colonial-era statues, to the insistence on the use of politically-correct terms, ‘woke’ zeal and, many would say, intolerance have made headlines over the last few years, more recently triggering an anti-woke backlash.

The vehemence of so-called wokeism – regarded by its critics as hypersensitivity and overreaction to social injustice and gender and racial discrimination – and, increasingly, its opponents’ response has often undermined discussion of political and social issues. Conservatives, particularly, complain of a rising cancel culture where woke liberals seek to sanction those whose views they disagree with.

The proposed pieces of legislation, the Draft Online Safety Bill and the Higher Education (Freedom of Speech) Bill, underline the difficult dilemma facing the government as it looks to guard against misinformation and enable healthy democratic debate. Do too little and you risk being accused of facilitating, or even presiding over, information anarchy. Do too much and you face charges of authoritarianism by liberals or conservatives, sometimes both.

The online safety bill requires digital platforms to remove harmful content, but critics say the draft law does not define what is and is not harmful, which could, they say, result in perfectly legal posts from ordinary people being banned. They say the proposed legislation effectively outsources internet policing to Silicon Valley.  Labour opponents of the higher education bill suggest it would allow those spreading “hateful, harmful and divisive speech” to take legal action against universities that tried to stop them.

But others would question whether you need to legislate at all. Universities already have legal obligations to uphold freedom of speech, and evidence from the Office for Students, the independent regulator for higher education, suggests that the amount no-platforming at British universities has been exaggerated. At the same time,  social media platforms, in response to both government and the public’s urgings, are doing more to remove illegal content and misinformation.

In the US, there is a similar and arguably more intense debate over social media content. As they come under pressure from the Biden administration for reportedly publishing misinformation, the tech giants have been accused by Republicans of an anti-conservative bias, including the suppression of posts questioning the efficacy of Covid vaccines. At the same time, Facebook, Twitter and YouTube continue to ban former president Donald Trump after some of his supporters stormed Congress in January. The US Senate subsequently acquitted him on a charge of incitement of insurrection.

Many on the right see Big Tech as being in cahoots with what they regard as Biden’s creeping censorship, an issue of huge import across America’s political spectrum and among the public at large as freedom of speech is guaranteed by the First Amendment of the US Constitution.

Such is the strength of feeling that a new Twitter-like platform was launched in early July by former Trump advisor Jason Miller in an attempt, he says, to broaden public debate. Widely reported as a conservative endeavour, Miller insists, GETTR, a portmanteau of ‘getting together’, is a “marketplace of ideas” and “will not cancel people for their political opinions” – with the platform’s ethos posing a “direct challenge to the social media oligarchs from Silicon Valley”.

He believes GETTR’s openness to debate and advanced digital features will offer a real alternative for those who have become frustrated with the current array of social media networks, “Users won’t have to choose between conservative-leaning platforms with inferior technology and slicker liberal Apps that crush their freedom of expression.”

Critics and adversaries on the left seemingly did their best to sabotage the launch, but as of July 20 the App was reported to have 1.5 million domestic and international users, among them high-level Republican officials. Thus, in the US, market forces, essentially conservative dissatisfaction with the status quo, have helped to generate a degree of social media pluralism.

Rather than introduce tricky legislation that could backfire, the UK government might draw lessons from the US experience and allow the digital market players to at least try to deal with harmful content and freedom of speech concerns. In the TV sector, GB News, a newly launched broadcaster, has led the way on the latter, offering a platform to those who feel “their voice has not been heard in the mainstream media.” After some initial technical hitches, it seems to be faring well. Could an alternative social media network soon follow suit?